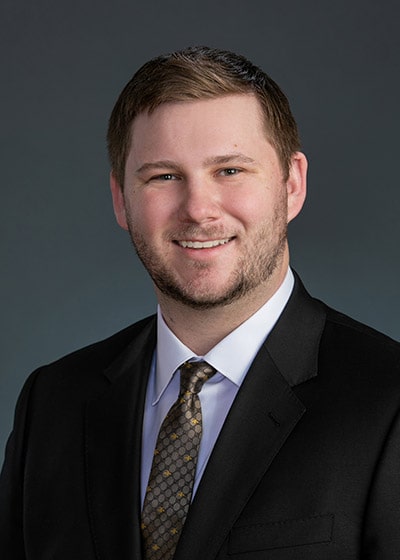 Jack Wilson practices in the firm’s Colorado office in the transactional department focusing primarily on business law and real estate.

Jack graduated from Emporia State University with a B.S. in Business Administration and received his J.D. from the University of Denver, Sturm College of Law. While in college, Jack competed as a member of Emporia State’s baseball team and was the president of ESU’s chapter of the National Collegiate Athlete Honor Society. While in law school, Jack was the recruitment chair of the DU Law Ambassadors and worked as an intern at Methodist Health System in Omaha, Nebraska, and as a law clerk at Leventhal Puga Braley P.C. in Denver. Before joining Spierer, Woodward, Corbalis & Goldberg, Jack worked as in-house counsel at Attorneys Title Guaranty Fund, Inc.

Jack, an Omaha, Nebraska native, has adopted Colorado as his second home, living in Englewood with his fiancé Alexa and great dane, Tiff. Jack spends his free time golfing, playing pickleball, and rooting on the Nebraska Cornhuskers.